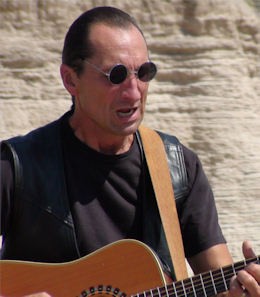 Survivor. Just having that word on this home page makes feel better, stronger. Reminds me, I'm one of them, a survivor. What can I say to my sisters and brothers in Indian country and beyond who are struggling with suicide that they don't already know? What can I do to remind them that they, you and I are not alone? Just as the site that you're on right now says, you are not alone in your struggle. We do care. This site wouldn't have been launched if we didn't care. I also want to make it clear that we're not here to preach or judge. Just simply connect. I've been there and it's not a good place to be. It's a dreaded place to be. My vision of hell. The heavy, hopeless darkness that consumed me. I couldn't be more serious when I say that one of the strengths I relied on for survival was that I wasn't alone in my struggle. You are not alone either. Believe it. Know that you can do this, one breath, one moment, one day at a time. I've learned the hard way to take the pain, the hopelessness and anger one breath at a time. It WILL eventually pass, you WILL laugh again, the sun IS going to rise again. Most importantly, what helps me through my struggle is I AM NOT ALONE. YOU ARE NOT ALONE. WE ARE NOT ALONE.

My story isn't unusual in Native spirituality. It's just my story ....and survival.

I was in that place of utter and complete hopelessness. I wanted this life over. The mental pain that hurt so bad. I wanted relief, a do-over. And I was angry. So very angry. Angry at Creator for putting me and so many others into this darkness. My mind was made up to end this cycle I was in. I felt a quiet relief in the knowing. I chose the day, the how, what and where. It would all work. What a relief. I'll never forget what happened with the very next thought I had. I was driving in a wind driven snow storm with this final decision fresh out of my thoughts when I felt a mental tug on my left side. I looked over and watched an eagle landing in a way that it's wings weren't moving, just outstretched. I knew at that moment I was in the Other World. Time froze, completely suspended. This question came out strong and clear, "What do you want?" My answer, "If I may, I humbly ask for a feather, if you have one to spare.I'll know then that my decision is not the right path." BAM!!! I was back in real time, back to driving in a snow storm. I continued to my destination not believing completely what just happened. Several hours later I returned to the location where I saw the eagle. I pulled my pick up over, half afraid to get out, afraid of what I'd find...either way. The wind had picked up, it was blasting against the snow, not a chance a feather could be there. Plus all the doubt, anger and pain where coming back with a passion. I walked right up to the spot. Looked down in the snow. Standing straight up as if it were planted there, was my feather. I dropped to my knees, cried hard. I held it up and out to the four great directions and thanked A-wo-hali for it's gift. I thanked Creator for the eagle. That was ten years ago. I've learned the hard way to take the pain, the hopelessness and anger one breath at a time. It WILL eventually pass, you WILL laugh again, the sun IS going to rise again. Most importantly, what helps me through my struggle is I AM NOT ALONE. YOU ARE NOT ALONE. WE ARE NOT ALONE. 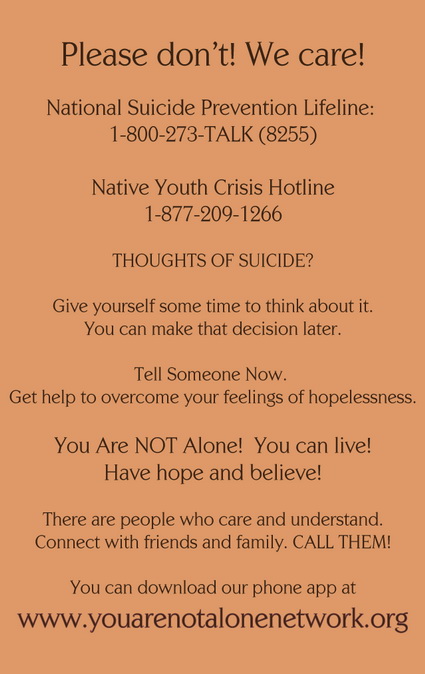